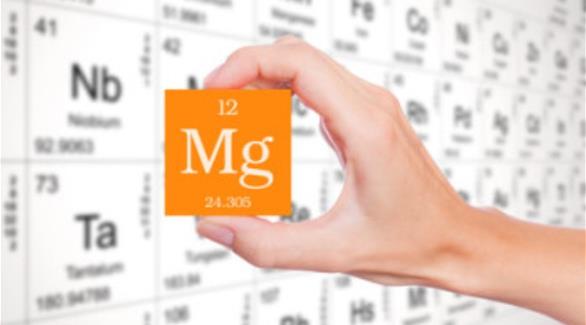 The ​Importance of Magnesium

From Wikipedia, the free encyclopedia

Magnesium is a chemical element with symbol Mg and atomic number 12. It is a shiny gray solid which bears a close physical resemblance to the other five elements in the second column (group 2, or alkaline earth metals) of the periodic table: all group 2 elements have the same electron configuration in the outer electron shell and a similar crystal structure.

Magnesium is the eighth-most-abundant element in the Earth’s crust by mass and tied in seventh place with iron in molarity. It is found in large deposits of magnesite, dolomite, and other minerals, and in mineral waters, where magnesium ion is soluble.

Although magnesium is found in more than 60 minerals, only dolomite, magnesite, brucite, carnallite, talc, and olivine are of commercial importance.

Magnesium is the eleventh most abundant element by mass in the human body and is essential to all cells and some 300 enzymes. Magnesium ions interact with polyphosphate compounds such as ATP, DNA, and RNA. Hundreds of enzymes require magnesium ions to function. Magnesium compounds are used medicinally as common laxatives, antacids (e.g., milk of magnesia), and to stabilize abnormal nerve excitation or blood vessel spasm in such conditions as eclampsia.

The important interaction between phosphate and magnesium ions makes magnesium essential to the basic nucleic acid chemistry of all cells of all known living organisms. More than 300 enzymes require magnesium ions for their catalytic action, including all enzymes using or synthesizing ATP and those that use other nucleotides to synthesize DNA and RNA. The ATP molecule is normally found in a chelate with a magnesium ion.

Spices, nuts, cereals, cocoa and vegetables are rich sources of magnesium. Green leafy vegetables such as spinach are also rich in magnesium.

Low plasma magnesium (hypomagnesemia) is common: it is found in 2.5–15% of the general population. The primary cause of deficiency is low dietary intake: fewer than 10% of people in the United States meet the recommended dietary allowance. Other causes are increased renal or gastrointestinal loss, an increased intracellular shift, and proton-pump inhibitor antacid therapy. Most are asymptomatic, but symptoms referable to neuromuscular, cardiovascular, and metabolic dysfunction may occur. Alcoholism is often associated with magnesium deficiency. Chronically low serum magnesium levels are associated with metabolic syndrome, diabetes mellitus type 2, fasciculation, and hypertension.

This may be a good place to introduce yourself and your site or include some credits.

Are you ready to start a cleaner lifestyle?

Today’s water is a challenge, Westinghouse provides the solution.